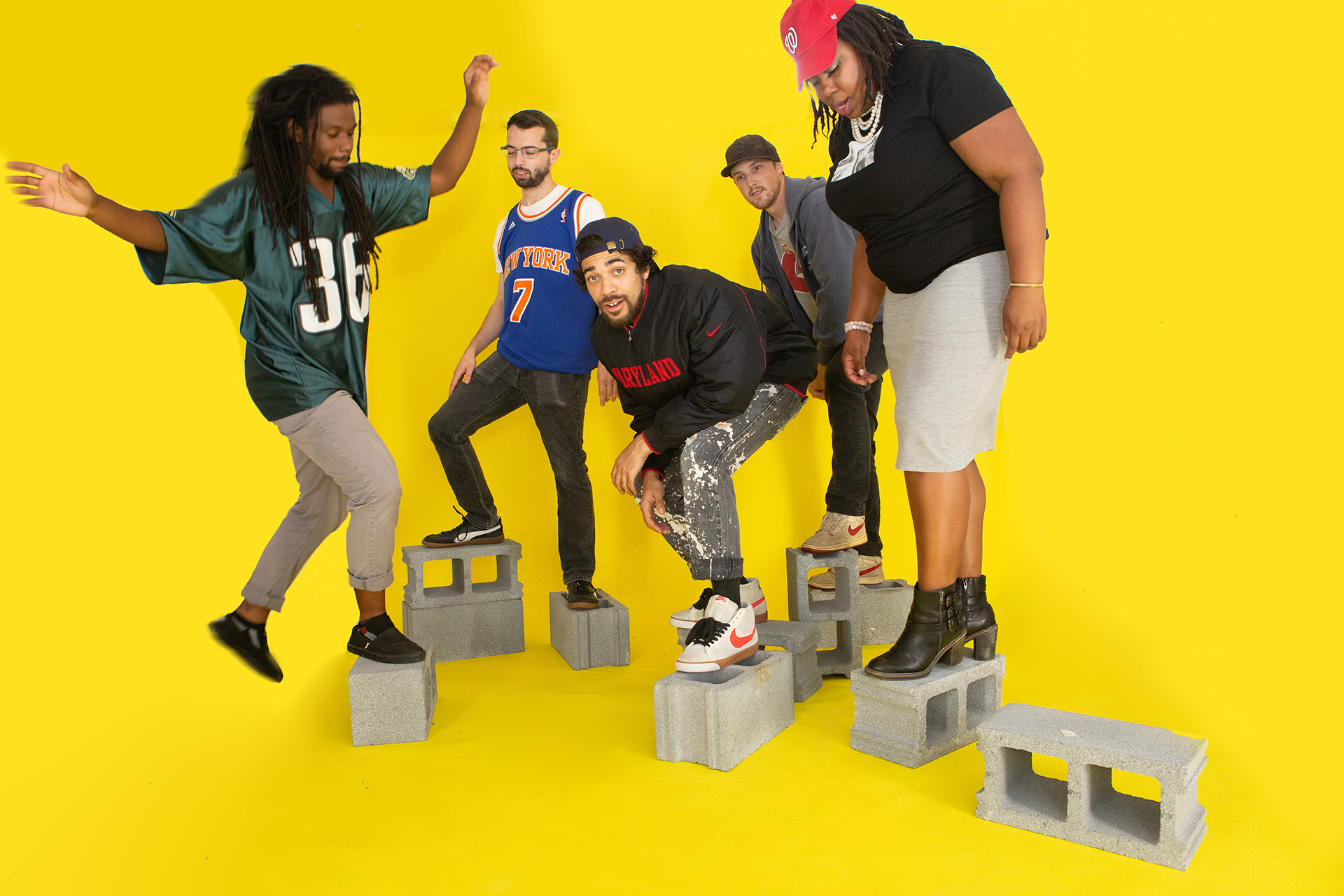 How many people are currently part of Ill Doots, and what do they do?

What have you been listening to lately? (Individually or as a group)

Editor's Note — Listen to all these recommendations as a Spotify playlist here!

When did the group form, and how did you all meet? Have you always been based in Philly?

We met in Philadelphia and have always considered Philly to be home base even as some folks have moved around. Our origin story is basically this: I (Scott: bass/musical director) met Jordan (drums) in our freshman year studying music at University of the Arts in Philly. We started playing together at least three or four nights a week, shedding J Dilla, RJD2, and other hip hop instrumentals that we loved. Meanwhile I (still Scott) met US (emcee) at an open mic. He was performing some "spoken word" type stuff but I could see that he was clearly a rapper. I reached out and asked if he would like to come jam with Jordan and I. He did, and if my memory serves me correctly, we went straight from the jam session to record our first song together in my dorm room.

When it came time to release our first mixtape and we wanted to perform some of the songs, it became obvious who would be in the band. Jordan had been there since day one, and we amassed more incredible musicians who had been hanging around and contributing to the mixtape. Our first live iteration was 11 pieces including a horn section.

I love your latest single "Ten Thousand Rayguns" — the production is tight, and the hook has been stuck in my head for days. What was the inspiration for this track?

Thanks so much, we so appreciate it. The track came out of a weekly exploration session with two of the members, J and Chubbz. On that day, they were experimenting with analog instruments which inspired the galactic vibe. When they finished the track, Anthony came up with the hook. The expression "you blow me away" describes both falling in love and getting your heart broken. While we understood the viscerally violent description of these experiences, it became unexpectedly more resonant upon release of the single. That same week, the stories of Ahmaud Arbery and Breonna Taylor were getting massive attention. We wanted to be responsible and honest about our feelings towards being in love, and the heartbreaking fact that we have a deep-rooted issue of accepting black people as anything but wholly human.

In broad strokes, how does your upcoming album "The Mess" compare to what you have put out before? What moods or themes are you hoping to convey in it?

This is definitely our most open minded and "present in the moment" artistic venture as a band. This is simultaneously our most intentional AND unplanned album. Unplanned because we did not set our minds on any particular theme, subject, sound, or even musical influence; we started from zero together in Maine, without even a scratch idea on the table to start with. In this way it was also the most intentional we had ever been, intending to immerse ourselves completely in each other's energies, the music, and the moment; it was a retreat.

Blackness is always our mood, to stare into whiteness, name the enemy and address it. To look into ourselves and see infinite possibilities. To look at our neighbor and know our experiences may be vastly different but also at root they are the same: we all want to be loved, we all hope that no harm befalls us. The theme we are always conveying is I.L.L. — I Love Living & I Love Learning, embracing life and all its gentleness and violence, joy and terror, and not rejecting what it has to offer but learning from it.

What artists have had the greatest impact on you?

J Dilla has influenced us more than any other artist we may draw inspiration from. We certainly spent our earliest years working to emulate his musical style and feel, but over time the journey has become to emulate his approach or perspective: to create with complete freedom. Our live show draws a lot of influence from James Brown, Sly & the Family Stone, and Prince. We grew up in the peak of pirating music, and I think we benefited greatly from falling in love with music at a time when the lines separating genres started to disappear. Our sound is built around synthesizing seemingly disparate influences into something we've never heard before.

As activists and arts educators, I imagine you feel a special duty at this time to educate people about ways to participate in the ongoing struggles against systemic racism & police violence which are now dramatically visible. How can our readers start these tough conversations & healing processes?

Do research. White people: Listen to black people... but don't ask us for answers for free, that is a deep emotional labor that is disrespectful to assume that they do. Use GOOGLE. All people: seek out conflicting news and information. Draw your own conclusions. This can be done by listening to others who have more knowledge and experience than you... but then do your research on that person.

Power is insidious—anyone can have an agenda, and unfortunately most entities and individuals do. Do you believe in whatever that agenda is? Watch how folx move compared to what they say. Beware the trendy activist—challenge them, challenge yourself—to care all the time, to make it your life's work to challenge and destroy systemic racism.

It's deeper than the police. This is not an excuse for the police system, it needs to be overhauled but I can't even stomach the emotional labor right now to describe all the ways it is a disgrace and danger to our communities. Start with fearless conversation. At home. At your job. At your school. Say what you believe in. Once everyone around you knows... go bigger, hopefully you can bring some of them with you to amplify the tough conversation further.

Silence enables systemic racism. Join or start organizations seeking actionable steps to turn voice into change. Healing can only happen together; even still, practice self-love and self-care. You can't march every day and expect not to experience fatigue. Prepare for the fatigue, it's much better than allowing it to surprise and overcome you; be wary, unchecked, it can slip into hopelessness.

If you could meet any one artist, dead or alive, who would it be? What would you say to them?

Nina Simone. "I see you, I thank you, I love you, I stand with you, I fight for freedom with you."

How has your sound evolved over time?

Our sound has become more refined over the past 10 years but has always contained a rawness that can't be captured by words. The first iteration of our line-up had 12 members including a three-piece horn section, two guitarists, keys, bass, drums, percussion, and 3 vocalists but members gradually started drifting away as time went on. We were down to nine members when we went on our first tour in 2010. The band went from nine to five from 2010-2020 but the rhythm section has taken on new roles to fill in gaps that were missing when other members left, in addition to adding the incomparable Elle.Morris who is a vocal powerhouse.

Do you have anything else that you want to share with the Tunestack community? 😊

Our newest album "The Mess" drops July 10th. We will be hosting an online music festival, "The Let Out", on the same day. This event will feature some of our favorite artists from Philly and across the country. It consists of musicians, visual artists, photographers, theater artists, and poets.

(n.)a pre-determined location - decided upon among friends - that signifies where to meet after an event has ended: a party, club, church, movie, date, work, etc. — or even right outside of the event itself.

In our case,“The Let Out” will be an online meetup, the official event celebrating the successful release of ILL DOOTS’ 2nd studio album “The Mess”; the album will release earlier in the day and this event will be in the evening after an afternoon of livestreamed listening parties. The Let Out will also be an OUTLET for our 30+ fellow artists of all genres to share their work and LET OUT the stories, songs, and expressions that have been building within us in these truly unprecedented times. Finally, the title of our event aligns with our mission in partnering with the Village of Arts and Humanities: to abolish youth incarceration — LET them OUT!

RSVP here for The Let Out on July 10th!

Tunestack is a mobile app for you to share your favorite music with friends.

Thank you! Your submission has been received!
Oops! Something went wrong while submitting the form.